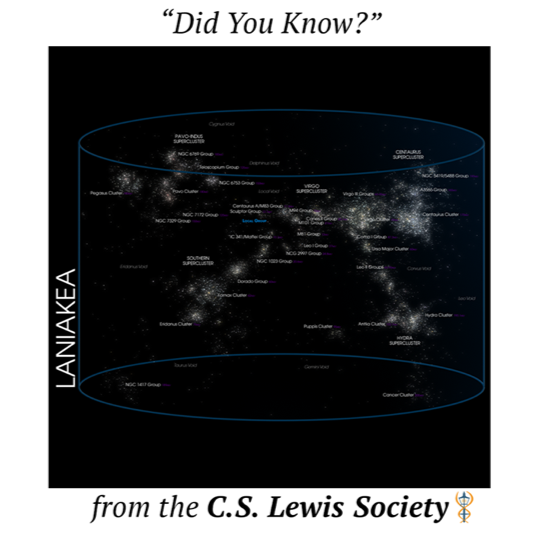 Scientists have stumbled onto a breathtaking cosmic discovery: “Laniakea”! In a nutshell, we inhabit one tip of a sprawling neighborhood within the universe, a shockingly vast supercluster of galaxies dubbed Laniakea (Hawaiian for “immense heaven”). Astronomers from Israel, France and the University of Hawaii were probing the mysterious movements of our “local group” of galaxies (including the Milky Way with its 200 billion stars) and other nearby galaxy clusters, as we are being pulled toward the mysterious “Great Attractor,” sitting over a hundred million light years away. That’s when the data lined up to reveal the “Laniakea supercluster” reality--with at least 100,000 galaxies. Get the story in this 4-minute Nature video - https://zcu.io/KkPt .

So we can paraphrase Psalm 19:1:
“The heavens—with Laniakea in the lead—declare the glory of God;
the skies—with its vast superclusters of galaxies--proclaim the work of his hands.”