In Cell Death, a Stunning Display of Intelligent Design 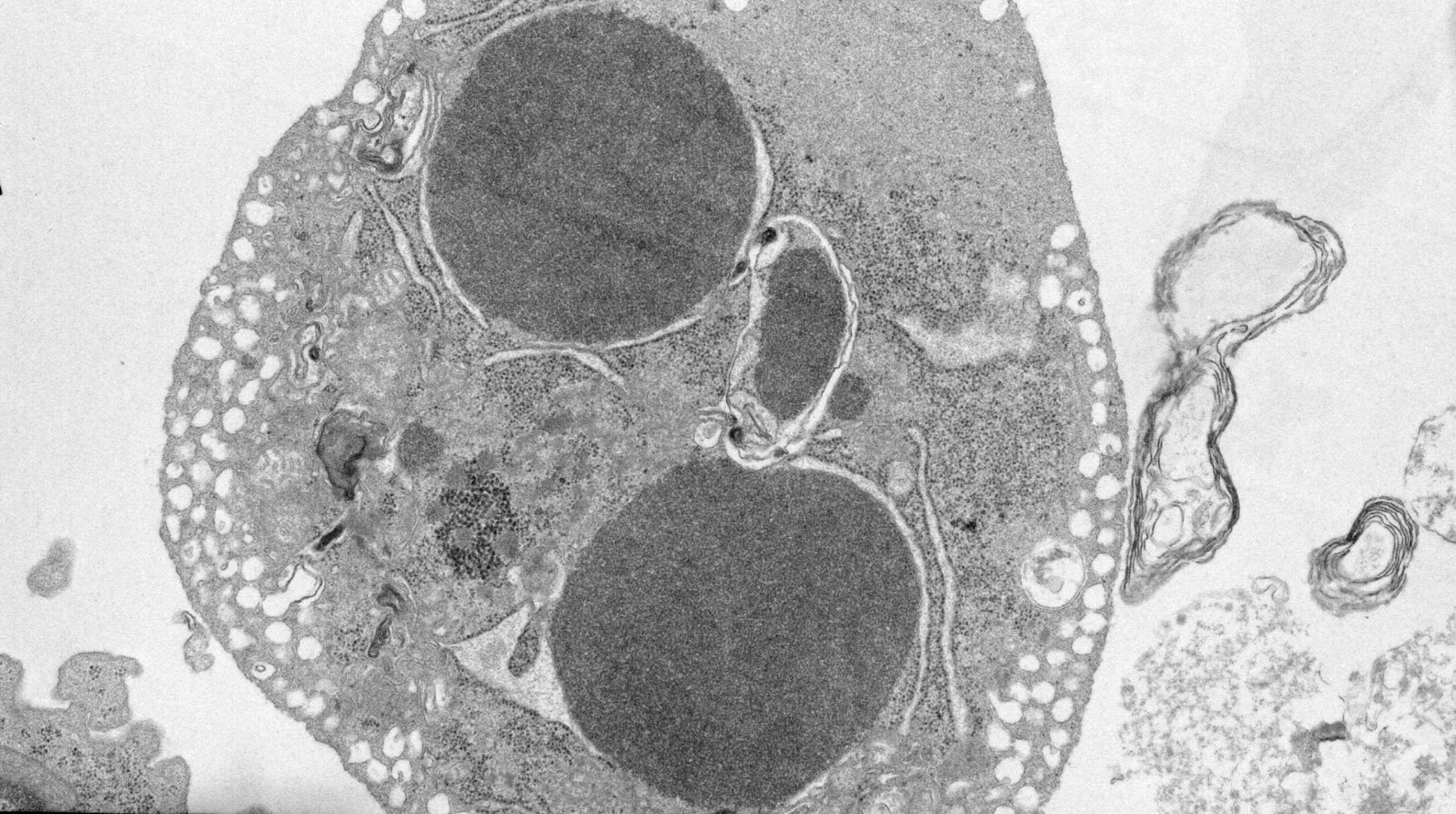 Some counselors try to comfort the grieving by saying that “dying is a part of life,” as if that would cheer up someone dealing with the loss of a loved one. Because of our exceptional natures, people have thoughts of the soul, eternity, and love. These far outstrip the physical necessity of disposing of a body that was housing a sentient being a short time ago. Cells only have the physical disposal to contend with, so in the following discussion, one must not draw comparisons too tightly between human death and cell death.

To a cell, dying really is a part of life. There’s nothing to grieve about! In fact, billions of cells die in the process of embryonic development, as our organs, fingers, and tissues are sculpted. That’s a wonderful thing. Nevertheless, tissues face real challenges in all stages of cell death, from deciding what cells need to bow out, to disposing of the “corpses” afterward. The cellular morgue is exquisitely designed for the challenge.

Nature Molecular Cell Biology posted an exceptionally informative review by four medical researchers about cell death, titled “The clearance of dead cells by efferocytosis.” The term efferocytosis may be unfamiliar to those who have heard of apoptosis (programmed cell death); it’s a more general term meaning “the phagocytosis of dead and dying cells” (where phagocytosis means, literally, “cell-eating” or cell-engulfing, and a phagocyte is a general term for any engulfing cell). The researchers, three from St. Jude Children’s Research Hospital and another from the National Institute for Environmental Health Sciences, organize their presentation around these topics: (1) recognition of dying cells, (2) mechanisms of engulfment, (3) efferocytosis and disease, (4) conclusions and perspectives. Each major category is subdivided into narrower topics. Anyone reading the paper will have a difficult time keeping track of dozens of players in the drama. Suffice it to say that the impression of sophistication and foresight is overwhelming.

Cells are environmentally “green” — they are experts at recycling. Why let all those amino acids, sugars, and other building blocks go to waste? While living, the cell keeps its lysosomes and proteasomes (molecular machines that recycle substrates) busy dismantling spent proteins and sending the components to recycling centers. Eventually, the whole cell’s work is done, or worse, has become infected and needs to commit hara-kiri. There’s an app for that. Apoptosis, programmed cell death, is a suite of tools and operations. Cells contain self-destruction kits, like spies with poison pills for use if captured. The poison pills consist primarily of the caspase family of proteins. Numbered caspase-1 through -14, these enzymes cut through (“cleave”) molecules like buzz saws. They are stored in an inactivated form for safety, like chain saws with covers and batteries removed. There’s more to the kit than that, though.

Apoptosis is the archetypal form of ‘silent’ cell death (Box 1). Processing of the apoptotic cell by the actions of activated caspases and their substrates, encapsulation of the cell into apoptotic bodies, and its subsequent disposal and recycling by surrounding phagocytic cells prevent the release of proinflammatory cellular contents and inflammation. During apoptosis, the cell releases soluble signals into the milieu to attract macrophages and stimulate their scavenging potential. [Emphasis added.]

Numerous actors come onto the stage when the apoptosis signal is triggered. In a sequence of steps, caspase-3 activates two other enzymes that create “find-me” signals that are sent out to attract wandering macrophages. A macrophage (a type of white blood cell in the immune system) knows how to engulf a target, which might be a pathogenic invader or a dying cell. The find-me signal is more than a beacon. It can even modify the macrophage’s behavior depending on the situation.

In addition to the “find-me” signal, cells can post “eat-me” and “don’t-eat-me” tags on their outer membranes. Because don’t-eat-me tags take priority, these act as Boolean logic gates. The eat-me signal only activates the macrophage if the don’t-eat-me tag has been removed. Consequently, part of apoptosis includes removing the don’t-eat-me tags. This ensures that macrophages do not destroy healthy cells. Here is a brief taste of the complexity involved:

Healthy cells decorate their plasma membranes with ‘don’t-eat-me’ signals that protect them from phagocytic targeting. Don’t-eat-me signals include CD47, which is recognized by signal-regulatory protein-? (SIRP?) on the phagocyte surface, and CD31, which homodimerizes with CD31 on phagocytes. Similarly, CD24 on viable cells engages SIGLEC10 on phagocytes to inhibit engulfment. Signalling in each case occurs through SHP1 and/or SHP2, mediating the suppression of pathways required for phagocytosis, including actin remodelling. MHC class I (MHC-I) can signal through LILRB1 to mitigate phagocytic activation, although the signalling cascade is not fully delineated. In combination, these signals regulate the initiation of efferocytosis.

No more of that, but one should emphasize that our account is vastly oversimplified. The paper is full of details like this, at every step of cell death and recycling.

Now that the phagocyte has found the cell to eat, how does it engulf the dying cell?

Efferocytosis is a tightly regulated process involving the coordinated engulfment of dead and dying cells, maturation of the phagosome and then breakdown of phagolysosomal contents. Each stage is governed by molecular mechanisms that allow rapid breakdown of the engulfed cell and recovery of the engulfing phagocyte.

In other words, the phagocyte, such as a macrophage, needs to protect its own contents from the poison pills and buzz saws in the dying cell. Numerous enzymes and molecular machines get involved. A dizzying paragraph in the paper describes some 30 tools that create the “phagosome” (eating-body) that surrounds the dying cell or pathogen to engulf it safely without harming the phagocyte. The phagosome then delivers the contents to the recycling machines.

Following recognition and entrapment of the dying cell, the phagosome and the cell corpse are destined for a well-orchestrated destructive end. The phagosome fuses with lysosomes, which contain a large variety of proteases, nucleases and lipases that digest the phagosome cargo. This fusion is promoted or impaired by modifications of the phagosome, as discussed below.

The phagosome containing the cell corpse is targeted to lysosomes through a multistep maturation process, which begins immediately following the formation of the phagosome on dynamin-dependent membrane scission and is marked by multiple biochemical changes at the phagosomal membrane….

Once again, the complexity in their description quickly overwhelms the reader. Of interest to those who remember the rotary motor ATP synthase, another rotary motor called vacuolar ATPase gets involved here. Vacuolar ATPase bears some similarities to ATP synthase. It churns protons into the recycle bins to acidify the contents, just like stomach acid helps break down food in the stomach. Uncanny the likeness at such a tiny scale.

The paper describes many kinds of modifications to the general picture. For instance, efferocytosis may act differently in different organs, such as the liver or kidneys. These special environments require even more players. Additionally, signal tags on cell membranes can give phagocytes more information, like the signal PAMP (“I’m infected!”) or the signal DAMP (“I’m damaged!”). The immune system is prepared for each eventuality, and knows whether to send the paramedics or the morgue crew. Every situation has its appropriate response. Think of the foresight needed to handle so many variations!

After the phagocyte has disposed of the cellular corpse and has recycled what can be reused, another task remains: cleaning up, and restoring the phagocyte for its next job. This is the resolution stage.

Once the phagosome has fused with lysosomes and its cargo has been degraded, a resolution phase restores homeostasis within the phagocyte, allowing further phagocytosis. Since dying cells are not the only phagocytic cargo, the outcome of phagocytosis can vary dependent on what cargo is internalized. In the context of efferocytosis, some of the components of the cell corpse can be recaptured and recycled for use by the phagocytic cell following lysosomal degradation. Sugars, amino acids, lipids and nucleotides are recycled to replenish cellular stores and can potentially be used as building blocks and an energy source by the phagocytic cell. The internalization and degradation of cargo can also influence the activation of signalling pathways.

Efferocytosis is an amazing, complete, and efficient package. People take little thought of what is going on inside their bodies at this scale all the time — until something goes wrong. The authors describe some of the terrible things that happen when components fail. Among them are autoimmune diseases, necrosis (accumulation of dead cells), neurodegenerative diseases like Alzheimer’s or Parkinson’s disease, multiple sclerosis, blindness, inflammation, atherosclerosis, liver disease, diabetes, impaired wound healing, rheumatoid arthritis, infertility, and cancer.

Efferocytosis is governed by a plethora of factors, including unique membrane lipids and multiple effector proteins, which mediate functions such as dead cell recognition, the activation of phagocytosis and, ultimately, the degradation of the cell corpse. As discussed, the multistep process from cell death to cell clearance is delicate, with multiple points of redundancy, indicating the importance of efferocytosis in development, homeostasis and pathophysiology.

Sometimes cell death is uncoupled from disposal, because the dead cell has another function to perform. Think of fingernails, where “cornification [hardening] of the outermost layer of the epidermis constitutes an extreme instance where the presence of the cell’s remnants has a biological role, serving as a physical barrier for environmental insults.” How does the fingertip know to do that, but it doesn’t occur in the eyeball? Everything works, and there’s a crew to handle every situation, at the right time, in the right place.

Companies sometimes take a group photo, where all the employees — the secretaries, the drivers, the administrators, the machinists, the janitors, everyone — come together and smile for the camera. This brief look at the cellular mortuary with all its specialized “employees” deserves a group picture. Congratulations to the whole company for keeping us all ticking, and thanks to the authors who did not cloud their review with speculations on how the corporation evolved.