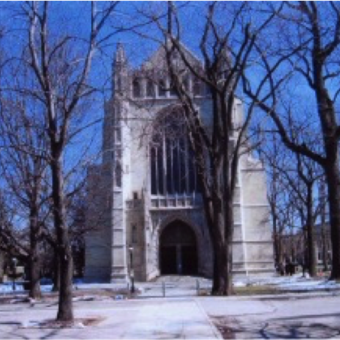 It took place one night in December, 1968, as snow began to swirl around the majestic gothic building known as the Princeton University Chapel (pictured at left). I was a freshman (that’s my frosh pic below), and I was on a mission, striding down the lane that led to the chapel from my frosh dorm, Witherspoon Hall.   As I looked up at the chapel’s silhouette against the winter sky on my left, I wondered, “What am I getting myself into, going to a meeting of Christian students, when I’m an agnostic, one step away from atheism?  Will I have any success in meeting the Princeton alum who leads this group?  Can I show him he’s wrong about his distortions of science that he’s been spreading on campus?”

I had decided that night to attend a special “Fall Bible Conference” meeting of the Princeton Evangelical Fellowship, a group that was led by a 78-year old Princeton alumnus of the Class of 1913, Donald Fullerton.  As I neared the chapel, I turned right off the main path, toward Murray-Dodge Hall, where a wide variety of Protestant, Catholic and Jewish student groups held their activities each week.

As I entered the carpeted atrium, I wondered to myself, “What kind of person is this guy Fullerton?” I felt a bit awkward, knowing that my purpose that night was to meet this venerable leader, and try to challenge him, on a very basic point of modern science:  the fact of evolution. I had been shocked to hear recently in a dinner chat with a fellow freshman attending the studies with Fullerton that he was presenting the “evidence against evolution” in a study of the book of Genesis.  “Anyone familiar with modern science knows,”  I thought to myself, “that there is no evidence against evolution.  It’s a proven fact!”

Fullerton had started a campus ministry called the “Princeton Evangelical Fellowship”—known on campus as “the PEF”—back in the 1930s.   Fullerton taught two group Bible classes each week, and met one-on-one with a dozen or more students, who were interested in peronalized tutorials in the Bible. 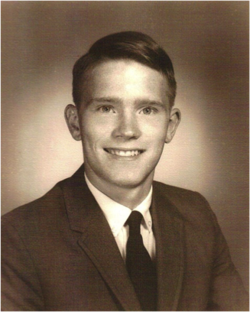 As I entered the PEF meeting, Dr. Fullerton was finishing his introduction of the guest speaker, a pastor of a church in Philadelphia.  I sat down in the back row and began to listen.

I had heard many sermons in my life in my little home church near Columbus, Ohio, most of them rather bland and boring and worthy of being forgotten.  Yet, this was not so much a “church sermon” as a fascinating lecture, or talk, such as one might hear in any university classroom.  The visiting minister was, in the space of a half hour, explaining from a variety of Old Testament and New Testament passages, what the Christian teaching was on Christ’s redemption of men and women from our plight of slavery.

Since I was not a Christian at the time, I listened with limited comprehension of what he was saying.  But two themes came through, and came through loud and clear.  First, the problem:  all mankind finds itself together in the same proverbial boat.  We have the same desperate need of being set loose from shackles of sin.  We are in bondage to the power and penalty of our own rebellion.  We are slaves, and there are many “metaphorical parallels” to be drawn between our spiritual slavery, and the slavery that was part of history-- in the Roman Empire’s vast network of trafficking in buying and selling humans.   Second, the solution:  Christ came and lived a perfect life and died to make a payment, a ransom, that has the power to release us from that bondage.  In reality, through his sacrifice he purchased us out of the slave market, and this release is actualized as soon as we turn to Him, and place our trust and reliance on Him, as the one died to pay our price and rose again to be our living Lord.

I am sure that the solution of this slave market reality of our current “human spiritual bondage” was made far more clear than the way I’ve expressed it here.  However, I don’t recall many details;  I was preoccupied by what I had to say to Dr. Fullerton, if possible, after the meeting.

I did manage to meet Dr. Fullerton immediately after that meeting, and I expressed a desire to discuss the creation/evolution issue with him in private.  He invited me to go back to his apartment (it was about 9 pm then), which was near the train station where the pastor would catch his train back to Philadelphia.  I agreed to the plan.  After we dropped off the pastor, we went to his apartment, sat down at a kitchen table, and began to talk.

I remember getting “off my chest” right away what I had come to say:  that the evidence for evolution was very, very strong indeed, and that it was simply untrue, and demonstrably so, for Dr. Fullerton to lead students to believe otherwise in his Bible studies.   I don’t recall clearly now (this was 42 years ago!) what his reply was to my scientific points, other than to briefly explain to me some of the evidences against Darwinism that he was presenting.

Rather than focus on science, Dr. Fullerton returned to the topic of the evening: redemption. He asked if I recognized the reality that all mankind, including himself and me, had a problem with “sin.”   I answered in the affirmative, in the sense that we violate our own conscience, and do so repeatedly.

“Do you understand what the plan is for Christ to redeem us from our sins?” he asked.    I found myself in a listening mood at that moment, so I let Dr. Fullerton expand on what the lecture had covered that night.  I recall him sharing one key verse, Isaiah 53:6--  “All we like sheep have gone astray; everyone has turned aside to his own way; but the Lord has laid on him the iniquity of us all.”  Dr. Fullerton explained that this entire chapter—Isaiah 53—was one long prophecy of Christ’s sacrificial death on the cross, as he was paying the redemption price for us.  The tiniest details of this  prophecy are fulfilled in Christ’s death in a rather amazing way, he said.

Did I embrace this message right away, as we talked, discussed, and even argued that night, and then met again the next day for several hours?  Well, it took a rather long time for me to seriously consider this newly clarified message of “eternal life” as a gift of God.  I look back on that December, and the months that follow, as a long, spiritual wrestling match with  God.  He was “pinning me to the mat” over and over, but I would not yield, I would not say “You win!”

By the middle of January, although I decided to “break off contact” with Dr. Fullerton, I clearly had come back to a belief in God, and could no longer call myself an agnostic.   I also began to experience what Germans call “angst”—a sense of general anxiety or foreboding, as one looks down the railroad track of life toward the sure end of one’s life in death.  Is there total oblivion of the individual human person?  Is there an afterlife?  Who can offer good evidence for believing anything about this?

As I thought about such issues, I heard about the opportunity to start a one-on-one Bible study with a 25-year-old Princeton grad, Bill Fay, to help me understand what it was to “receive and believe” this person, Jesus Christ, as my personal redeemer.

Starting in February, Bill and I began meeting each week, for an hour or so in my dorm room, to discuss passages from the Bible and their personal application to us.  I remember relatively little of what we talked about, but what I appreciated was Bill’s low-key, “no pressure” attitude in our meetings. I also recall that he recounted his own journey, about 6 years earlier, as he entered Princeton as a non-Christian.  I listened intently as he told his story.

One night, our last study of the semester in early May, was different from the others.  We were meeting in Bill’s apartment off campus.   I remember Bill summarizing for me, once more, what Christ had done for us all--in paying for our sin and rising.   I know he stressed that salvation was a “free gift” that comes to us as we trust in Him, and not our own “good works,” as the way back to God.

For the first time, I recall, I sensed that I suddenly come to the point of suspending my dogged, blanket disbelief in Christ’s resurrection.  (Looking back, I think of how much I was like Doubting Thomas, struggling with Christ’s resurrection, in John 20.)   Bill explained,  “Trusting Christ is not like sitting here, looking over at that chair by the wall, and saying, ‘I think it will hold me.’  It is more like getting  up, walking over, and actually sitting down on the chair, committing all of your weight to the chair.  That is what Biblical faith is like. It is resting totally on the person of Christ and what he did for you.”

I looked at him, and said, “Do I have to make this commitment tonight, here, in front of you?”

Bill said, “No, you can do it in private; you can go into your dorm closet if you want.  But if you make that step, please let me know right away so that I can encourage you in your new path.”

I replied, “Thanks for not pressuring me.”   I thought for a second about what he had said, and continued, “You know—I think I’m going to do this sooner or later, so why don’t I go ahead and do it now?”

At that point, I simply bowed my head and prayed a simple prayer, on my own, putting trust in Christ, as the one who loved me, died for me, and rose again. I thanked him for his gift of life.

As soon as I did that, I knew quietly in my heart that a change had occurred.  A transaction had taken place.  I was no longer wondering, “What happens if you die?”  I knew I would enter God’s presence at death, not because of any good work I had done, but because of what he had done--the sure redemption of Christ.

That night was the beginning of an exciting journey of faith.  All my questions were not answered that night.  In fact, my first baby-ish prayer ten minutes later, as I headed back to my dorm, was that God would exempt me from attending  PEF meetings, since I was still a convinced evolutionist, not really wanting to hang out with a bunch of creationists!   Such questions and confusions took months or even years to resolve, as I began studying the issues, and the data.  It was several months later that I began to rethink the creation issue, and began to come to my current (pro-intelligent-design) conclusions.

But one thing was secured that night, and had never left me in the 40-plus years since:  I rest securely—on Christ’s redemption.  I thank him for that fantastic gift, and those who guided me to this path of everlasting life.