How to Make Sweet DNA: 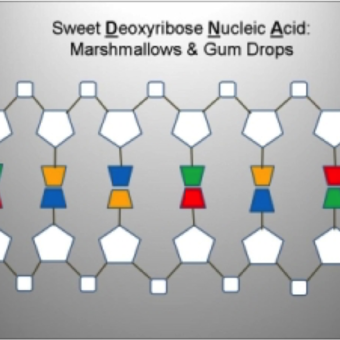 A Short Course on the Double Helix

Each year in my introductory science course at Trinity College of Florida, I take one class session to allow my students to experience a simplified “candy-confection” type of DNA modeling.  We use fairly simple edible ingredients for this exercise:  large marshmallows, miniature size marshmallows, and “Spice Gum Drops.”  The latter come in a bag containing several dozen small gum drops of many colors, and all three ingredients are available at any typical grocery store.  The last thing needed is toothpicks, to attach everything together.

First, I give a briefing using a chart like the one below.  You’ll see that the large marshmallows (shown as pentagons here) are the “D” or deoxyribose sugars, and the small marshmallows are the “P” units or phosphates that link the sugars together.  The nucleic acids—the four “letters in the DNA alphabet”—are represented by four colors of gum drops:

I explain in this chart that a crimson drop must always be paired with a green drop, since “C” letters pair with “G” letters.  Likewise, an azure gum drop must always be paired with a tangerine drop, since “A” letters in DNA always pair with “T” letters.  I stress that the paired letters are not to be joined by a toothpick, but are just “snuggled” together, as if they are kissing.  This enables the ladder-chain to split apart in the middle, just as DNA splits down the middle when it is ready to be read for RNA copying.

I divide the class into teams, give them plenty of marshmallows (of both sizes), toothpicks, and roughly equal numbers of azure, tangerine, crimson and green gum drops.  Then I start them building a DNA chain of about thirty ladder rungs, which enables them to make enough DNA to code for thirty RNA half-rungs, which then would produce (in the translation process at the ribosome) a string of ten amino acids, just one-tenth of a typical short protein.

If there is enough time, one end of the chain can be opened up, and a short sequence of RNA can also be constructed, again using big and small marshmallows, joined together by toothpicks, and then the four letter RNA language, which replaces “U” for “T.”  This means that, using the color system mentioned in our book, “The Mysterious Epigenome: What Lies Beyond DNA,”  brown gum drops are needed, since umber (medium brown)  is the color symbolizing the RNA letter “U” (Uracil).  This can be accomplished by dipping some of the white gumdrops in cocoa powder (which admittedly can be messy), or using cut up bits of a Snickers bar, or by just using the white gumdrops “as is” and using the memory “color” of “Uncolored” as the symbol for “U.”

I find that students enjoy this exercise, and we even once made a truly accurate model of a transfer RNA (tRNA)—that was a challenge but quite doable, given a little guidance.  Enjoy your sweet DNA (and RNA) adventure!